Dr. Flores has created a powerpoint to educate both doctors and patients on the various breast reconstruction techniques: Breast Reconstruction PDF

These techniques utilize a flap of skin which is removed from other areas of a patient’s body, such as the back, buttocks, or abdomen. The flap of skin is then transplanted to a certain area in the chest, along with a reconnection of blood vessels to the newly reconstructed area. 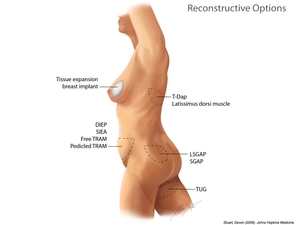 This flap procedure, or free tissue transfer, is the pinnacle of flaps for breast reconstruction. Skin and fat are removed from the lower abdomen, while preserving the lower abdominal muscle, rectus abdominis, and its nerve sensations. This flap has replaced the TRAM flap technique as the best option for breast reconstruction Miami, by reducing surgical outcomes such as hernias, bulges, and muscle imbalance. The incision for the DIEP flap is closely similar to a “tummy tuck.” The flap is connected to vessels in the chest to recreate a natural feeling and an augmented new breast that has the potential for sensation in the reconstructed area. Choosing a DIEP flap procedure completes breast reconstruction without the need for further surgery or for future mammograms.

Following a mastectomy, this flap technique is a tissue flap procedure similar to the DIEP flap, which uses skin and fat from the upper gluteal area to create a new breast. This technique does not require any gluteal muscle to be cut or moved for this type of reconstruction.

This flap technique is similar to the DIEP flap, both in content and procedure. Skin and fat from the upper outer gluteal region (love handle area) are harvested without any muscle. The LSGAP is a major modification from the traditional SGAP. Dr. Flores designed and pioneered the LSGAP to remove tissue from an unwanted area of the body, without distorting the gluteal buttocks. Additionally, the harvested vessels used are often longer, and in 50% of patients, no muscle dissection is required. As a result, post operative pain is decreased and recovery is faster for the patient, than with the DIEP flap technique. The LSGAP flap is recommended most often for patients when there is either insufficient abdominal tissue, or when previous surgery prohibits tissue removal from this area.

This flap technique is a free flap consisting of skin, fat, and gracilis muscle from the inner thigh area. It is connected using similar methods as with the DIEP and LSGAP. This technique results in a desirable donor site incision because the incision can be well concealed. However, this flap does not provide a substantial amount of tissue for the newly constructed breast and therefore, is typically reserved for women who are small breasted.

This flap is a free flap composed of skin and fat removed form the patient’s back area, leaving a scar along the bra line. The blood vessels that supply this flap are meticulously separated form the latissimus dorsi muscle (middle and outer back), so that the muscle is not sacrificed and strength in the arm and shoulder are not compromised. This flap technique is an excellent option for partial Miami breast reconstruction following a lumpectomy or partial mastectomy.

Other free flap techniques include the ALT Flap Technique (Anterior Lateral Thigh), the lateral arm, and the radial forearm. These flaps do not utilize muscle removal, thus preserving muscle and donor site functions. These flaps are the new state-of-the-art techniques of microvascular reconstruction in the world of plastic surgery. In addition, to breast reconstruction, these techniques are also being used for head and neck, chest wall, abdomen, and extremity reconstruction as well.